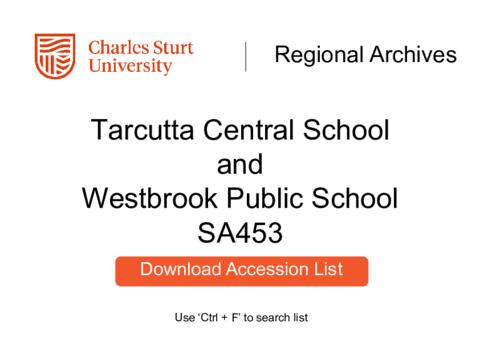 Tarcutta Upper Half-time School opened August 1873 and became a Provisional School in September 1880. Provisional Schools were opened in areas of smaller populations where insufficient children attended to justify the opening of a full public school. By 1880 fifteen students were required to maintain a provisional school. Usually the Department of Public Instruction supplied the teacher, books and other teaching materials and the parents provided the premises for the School.

In December 1881 the School was converted into a public school. A Public School was a basic elementary school in the New South Wales education system. An attendance of twenty children was required to maintain a school of this classification in 1880. The expenses of conducting the school were borne by the Government.

In 1912 the School was re-named Tarcutta Public School. The Tarcutta School became a Central School in 1948. Central Schools contained both primary and secondary departments and accepted pupils from other towns in the vicinity as secondary students. They covered a syllabus similar to high schools and were a characteristic in towns too small to support a high school.

The Tarcutta Central School resumed its status as a Public School in January 1972. In 2005 the School was described as follows, "Tarcutta Public School is a three teacher rural school situated 45 km east of Wagga Wagga on the Hume Highway. ... The school services the Tarcutta and Kyeamba communities for a radius of 30km, with fifty per cent of students coming from the Tarcutta township.