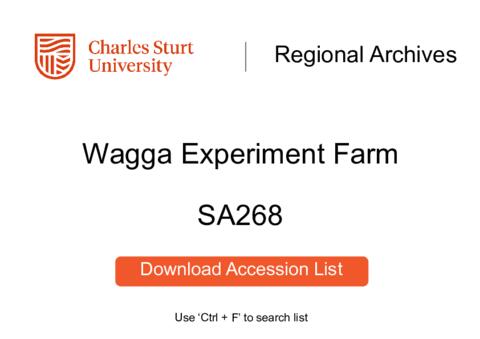 The Wagga Agricultural School and Experiment Farm was established in October 1892. Students were accepted from 1 October 1896.
The entry age for boys was set at 15 years of age (1). Being also a research station for improvement in cereal strains, it was intended that the students would be provided with the practical knowledge of farm operations. They worked a 48 hour week, and were taught by the research staff and the workmen employed on the Experiment Farm. (2)
The students received instruction in cultivation, propagating and grading of crops as well as care and handling of livestock and blacksmithing. (3) The Experiment Farm provided a two year course of instruction in agriculture which led to a certificate. However, it was not uncommon for some students to leave as soon as they had accomplished their goals and thus did not stay to complete the course. (4)
In 1948 the Minister for Agriculture proposed the establishment of an Agricultural College at Wagga offering a three year diploma course, and on the 9 September 1949 the Wagga Experiment Farm was converted into the Wagga Agricultural College. (5)