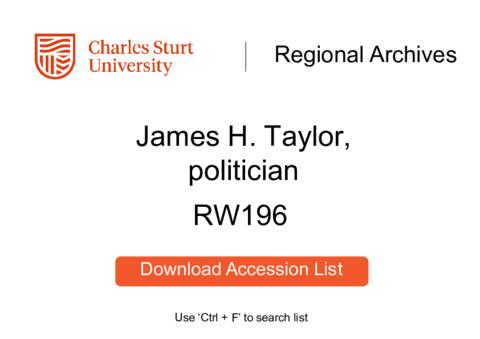 James Hugh Taylor was born on 20 March 1920, to Samuel Taylor and Mollie. Taylor was raised in Sydney, New South Wales (NSW) and educated via distance learning at All Saints College in Bathurst. On 27 November 1945, he married Marjorie Hawthorne and had a son.

Taylor became active in both local and political parties, at first as a member of the Farmer and Settlers’ Association (FSA); member of the Returned Serviceman’s League (RSL) (1946-); Shire of Goobang councillor (1959-1962); Central Tablelands County Council councillor (1959-1962); Forbes to Tottenham Water Development League Chairman (1957-1962); district council president and general council member (1959-1960); United Farmers and Woolgrowers’ Association member and NSW Legislative Assembly member (1960-1981). Taylor was elected and re-elected several times as a member for Temora from 1960; elected as party whip in 1973 and finally retiring on August 1981.