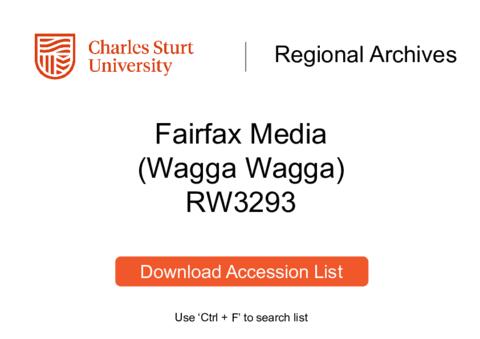 The first issue of the Wagga Wagga Advertiser was released on 10 October 1868 for the cost of 6 pence. The paper was co-founded by two wealthy local pastoralists, Auber George Jones and Thomas Darlow, whilst the first editor was Frank Hutchison, an Oxford graduate. These men believed that the growing prosperity and importance of the Wagga Wagga district required greater representation in the press. The paper would aim to give proper importance to the subject of agriculture and to be devoted to people from all socio-economic levels.

Originally the Wagga Wagga Advertiser was only published bi-weekly, on Wednesday and Saturday, and would consist of only 4 pages. By February 1880, the paper was published tri-weekly, on Tuesday, Thursday and Saturday, due to popular demand. In 1881, the paper was reduced in price from 6 pence to 2 pence, to make it more affordable. The paper finally became 'daily' on 31 December 1910.

At about the same time, the newspapers' offices relocated from Fitzmaurice Street to Trail Street under the guidance of owner Stephen Sullivan, who originally joined the paper in 1868 as a 21 year old printer. When the partnership between Jones and Darlow dissolved in 1871, Sullivan and his father-in-law, J. Mackay, bought the 'Advertiser' in partnership. Sullivan was to continue an association with the paper until shortly before his death in 1933, a total of a little over 60 years.

With Sullivan's death, The Daily Advertiser was left to his daughters, Alice and Forbie, who sold the paper to a company owned by Rupert "Rags" Henderson and Hanne Anderson (later, Fairfax) about 20 years later. On 23 July 1962, the Wagga Wagga Daily Advertiser was reduced in size from a broadsheet to the smaller 'tabloid' size. When the paper celebrated its centenary in October 1968, it was only the fourth provincial daily newspaper in NSW to do so.

It was during Henderson's time as owner that the Riverina Media Group was created. General Managers of the Group included: John Charles Jackson (1961- 992), Graham Gorrel (1992-2000), Wayne Geale (April 2000- ?), Paul McLoughlin (?- present). After Henderson's death, the company passed to his daughter, Margaret Jarrett, and then to her daughter in turn, Alicia Jarrett in 2002.

In 2007, Rural Press Ltd bought the Riverina Media Group, just a few weeks before Rural Press itself was merged into Fairfax Media. At the time, the Group published 7 newspapers in the Riverina (including The Daily Advertiser (Wagga), Riverina Leader (Wagga), The Rural, The Area News (Griffith), The Southern Cross (Junee), The Colypoint Observer (Coleambally and Darlington Point), and The Irrigator (Leeton) and the "Seniors Newspapers" for five states.

The Daily Advertiser is currently a subsidiary of Fairfax.

Photographs on CD-ROM for newspapers of The Riverina Group (including The Daily Advertiser, The Southern Cross, The Area News, The Irrigator, The Rural News, and The Leader).

Misc. pages on CD-ROM from The Daily Advertiser.