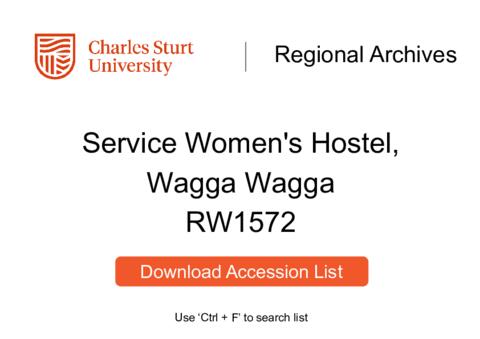 Bess Duncanson was Matron of the Service Women's Hostel in Wagga Wagga during the Second World War.

The Service Women's Hostel was founded in 1943 to accommodate service women who had been training in Wagga Wagga during the course of the Second World War. Situated on Morrow Street, the Hostel operated originally under the guise of the Y.W.C.A. leave house for young country girls. To support the war effort, the NSW Regional Committee, with the aid of the Australian Comforts Fund and Wagga Mayor's Patriotic Fund, contributed to the refurbishment and staffing of the Hostel to cater for service women and trainees at a cost of £2000. The Hostel could accommodate up to 54 guests and included amenities for washing, ironing and entertaining. Lady Gowrie, wife of the Governor-General, who officiated at the opening on 3 April, commented that the service women were going "to feel like girls again", rather than return to their homes "hard-faced" after war training and service.

Elizabeth (Bess) Duncanson (nee Tompson) was appointed Matron of the Hostel and was assisted by a Mrs Curtis, whose husband was in the army at the time. Duncanson was born in Glasgow, Scotland on 22 March 1900 and migrated to Australia in 1925. She first worked in the country as a housekeeper and then met and married a Thomas Duncanson in 1931 in Sydney. After marriage, Elizabeth obtained work in several positions, including a small mixed business she opened in Botany. After Thomas' death from an illness, Elizabeth sought work in the canteen of 'Snows', or Snowball Bros, a large dress-manufacturing store in Sydney.

The outbreak of war influenced Elizabeth to apply for a war job at the Service Women's Hostel in Wagga Wagga, where she remained the first and only Matron until 27 January 1946. Elizabeth's contribution to the Hostel was recognised by the Joint Honorary Secretary of the Wagga Wagga Mayor's Patriotic and War Fund at the cessation of her employment where she had "received glowing tributes regarding her personality and capabilities". Elizabeth returned to Sydney after the war and was appointed Matron at one of W.D. & H.O. Wills' leave houses for country girls at the Caxton Park Tempe Complex, until 1956 when she joined the Emergency Housekeeping Association. She retired four years later and died on 14 September 1991.

During the course of the war, the Hostel served as the ideal setting across from the picturesque Victory Memorial Gardens to host wedding receptions, celebrations and parties for different occasions. At a time when emotions were strained, the Hostel was a special place for many young ladies who not only forged many endearing friendships, but also tasted a sense of independence for the first time. At the conclusion of the war, the Hostel was returned to the Y.W.C.A. and catered for civilians passing through the Wagga Wagga area. In the early 1980s the Hostel was converted into 'The Manor' restaurant and is today the 'Mates Gully Restuurant and Accomodation'.