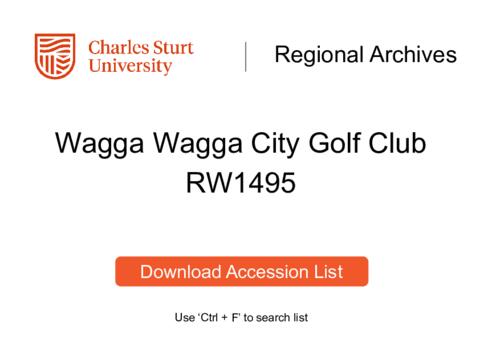 Golf in Wagga Wagga dates back to the early 1890's when a small group of golfing enthusiasts played on a few holes laid down on the bend of the Murrumbidgee River, below the Hampden Bridge, on the area now known as the Wiradjuri Reserve. The Wagga Wagga Golf Club was formed on the 27 June 1895, after a meeting at the Australian Hotel, thereby making it the second oldest golf club in the Riverina (behind Cootamundra), and the fifth oldest in NSW. The original nine-hole sand green course was first utilised on the 5 July 1895 at the Racecourse, and opened officially by the President, Mr. T.H. Wilkinson, on 13 June 1903.

During the early years the main competitions that golfers from Wagga competed in, apart from the Wagga Wagga Championship itself, were inter-club challenges against the likes of Cootamundra, Albury, Henty, Yass, Holbrook, Junee and Goulburn. These events helped to foster the growth of the Wagga Wagga Golf Club, and by 1921 its membership had flourished to 157 members, making it the largest country golf club in NSW. It is also interesting to note that at this early stage there was already a private 'links' in Wagga Wagga, situated near the present Wagga Wagga High School named the 'Hillside Links'.

By 1923 the Wagga Wagga Golf Club was finally in the financial position to build a new club house. This was situated on the corner of Kincaid and McKinnon Streets. The club not only became the regular place for the holding of the Club's meetings, but was also an excellent venue for social events and fund raising activities. The excellent position of the club, in terms of finances and membership, was evidenced by the fact that during the 1923 season the Wagga Wagga Golf Club appointed its first permanent Greenkeeper.

As the sport continued to expand there appeared a need for uniformity and control within the district clubs. In July 1924 a meeting of twenty district clubs resolved to form the Riverina District Golf Association (R. D. G. A.). With an ever increasing membership the committee of the Wagga Wagga Golf Club decided it would be practical to extend the links to 18 holes. This was completed in 1925. By 1928 the Wagga Wagga Golf Club was not the only public links in Wagga Wagga. The Wagga Wagga Country Golf Club was established on the 5 July 1928, and opened officially on 3 May 1930.

During the Second World War, the Wagga Wagga Golf Club experienced tough times. The Club decided to abandon all tournament and championship play as a direct result of a financial downturn and drop in membership. The effect of the war was evident when one considers that the number of R. D. G. A. clubs in 1945 was only 18, in comparison to 52 in the pre-war years.

The installation of the first poker machine in 1954 proved to be a huge success both for the Club financially and for the entertainment of the members. This was followed closely by the granting a liquor license in 1955 by the Licensing Court.

As early as 1962 the Club Committee began inspecting possible alternatives for a new course. The first sight of interest was 120 acres at the Pomingalarna Common, which by 1964 the Club was leasing from the Wagga Wagga City Council. Heavy pressure from the Riverine University League and the NSW Department of Education, who required the land at Pomingalarna for a possible University site, derailed the Club's plans for a new course. After this disappointment, the Club looked elsewhere to secure a new site, and in 1967 the opportunity to acquire 140 acres at the site of the present Riverina Australian Football Club in Fernleigh Road presented itself. Yet, at a special meeting the members voted to stay under the tenancy of the Murrumbidgee Turf Club.

The search continued and in 1968 an effort was made to obtain a portion of North Wagga Wagga flats. Unfortunately, this venture had to be abandoned when part of the area became flooded. It was not until March 1978 when the possibility of leasing Pomingalarna Common arose again, that the Club decided to act. On 18 September 1978, the 117 members in attendance voted unanimously to relocate the course and the clubhouse to the eastern end of the reserve. The major earthworks commenced in September 1980 and the new Wagga Wagga Golf Club was opened officially on the 13 March 1982.