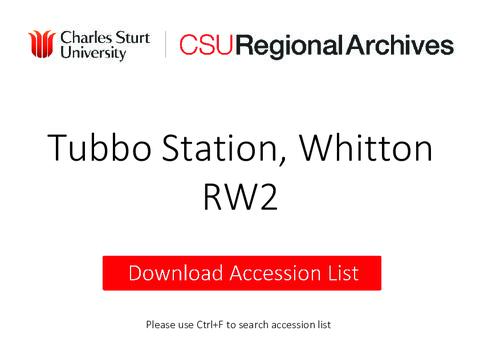 Tubbo Station, located near Whitton, still stands as one of the richest and largest grazing and sheep properties in the Riverina.

Tubbo was first established during the mid-1800's by a Scottish squatter, John Peter, who managed successfully almost twenty runs, or over 740 000 acres, throughout this region by 1866. John Peter's financial health was equally blessed by his fortunate marriage to the widow of the Gumly Gumly Station owner, Mrs Mary Bourke in 1837. His contribution to the growth of Wagga Wagga was also integral. He was particularly influential in lobbying for the establishment of a permanent Court of Petty Sessions in Wagga Wagga and he would often serve as magistrate for the Bench in the Wagga Wagga district. Moreover, John Peter's Tubbo rose from meagre beginnings to become almost a village within itself, comprising of 7 smaller stations, a school, blacksmith and general store for its employees and their families. All of John Peter's stations boasted a reputed annual income of £40 000.

An investment company later purchased the Tubbo run from John Peter's Estate in 1887 at a cost of over £361 000. The Tubbo Estate Company, which consisted of directors Archibald Fisken, John Archibald Campbell, William Peter McGregor and Andrew McGregor, bought the 200 000 acre run and continued to manage it as predominantly a sheep station. In its first year of operation as a company, Tubbo prided itself on its shearing output, clipping as many as 121 847 sheep, which was the third largest amount shorn in New South Wales. Much of the initial shearing was, however, carried out by non-union shearers.

Inevitably, Tubbo became the centre of unionist activity by the end of 1888, forcing the first manager, Neil McCallum, to hire the services of the police for protection. McCallum was not afraid to use the law to discipline workers. In one case of industrial sabotage, an engineer who had worked on a steam engine was dismissed because there was no employment for him. The engineer had tampered with the machinery with the intention of injuring the next operator. McCallum assembled a party of policemen and pursued the fleeing worker, catching him later at Narrandera. The engineer was charged and eventually released on bail at £400 and summoned to appear at Wagga Wagga Court House.

The historical significance of Tubbo Station cannot be underestimated, since it is one of the few remaining stations that managed to avoid losing much of its holdings to government subdivision and soldier settlement. Maps of Tubbo held in the collection illustrate the shrewd efforts of early management in retaining much of its river frontage, despite the existence of a reliable underground water source. Back blocks were cultivated eventually, or dressed up and sold off to the government for the purposes of closer settlement. The Tubbo collection is rather large and comprehensive, offering researchers of grazing and rural studies a fine reflection of the management practices that have taken place on bigger stations from the colonial days up until the 1970s.