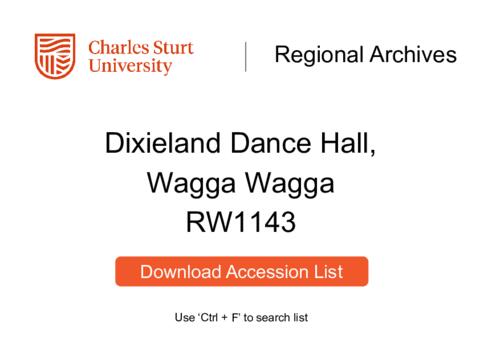 On 23 November 1921, Dixieland, “Wagga’s Premier Rendezvous of Joy,” opened to the public at the City Concert Band’s Beach Carnival. Dixieland was a jazz hall and entertainment venue, located at the end of Little Gurwood Street (now Sturt Street), with a dancefloor that floated atop the Murrumbidgee River. During the illustrious Jazz Age (1920-1933), Wagga residents flocked to the riverbank to enjoy a wide range of recreational delights and dance the night away. The popular dance spot, turned commercial venue in 1923, was directed, maintained and often entertained by the Wagga Brass Band.

The Brass Band consisted of local musicians and a committee that liaised with Wagga Municipal Council and visiting performers. For a time, the Brass Band was subsidised by the local Council to perform at charity events for local entities including the hospital, ambulance service and Wagga Grammar School. Also, they were the official band of the War Service Committee. They played WWI soldiers out of Wagga upon deployment and back into Sydney on their return. In addition to their Council subsidy, the band’s other sources of funding were donations and entry fees from Dixieland patrons. These funds helped pay for uniforms, instruments and a fee for a professional band director.

The local band and entertainment scene were integral to the community’s livelihood during the roaring twenties. Dixieland was only a part of Wagga’s active nightlife; other venues included Wonderland Theatre/Café, the Masonic Hall (later known as the Oxford Theatre), The Strand picture theatre and Dixieland Roller-skating Palais. These proved popular with their exciting programmes; for example, Dixieland’s highest recorded attendance was 2,300, in 1929. The entertainment at Dixieland ranged from competitive activities (i.e. euchre tournaments and dancing competitions) and successful efforts to smash world records to jazz acts and vaudeville performances. Wagga residents and visiting tourists enjoyed the talents of saxophonist RJ Homann, Long Tack Sam and Wee Billy Kerr. Additionally, visiting rugby clubs, cricketers and, in 1925, members of the US fleet were brought to the jazz hall and treated to local acts: the Lyric Orchestra, Wagga Melody Makers, Riverina Revellers and the Wagga Brass Band.

The venue thrived throughout the twenties and endured several floods, but, after continuous damage, it was decided that a more stable floor, on brick supports, needed to be installed, thus an improved, steady and spacious venue was installed in 1925. Floods caused Dixieland to close and re-open many times, and may have caused its permanent closure in 1934 when more performances were held at inland venues such as the Town Hall Gardens and Wonderland Theatre. Residents had to watch the newspaper to find out where shows would be held in the event of a flood and when the hall would reopen for business once the river waters receded.

It is still unclear when and why Dixieland permanently closed its doors. It seems it held steady as the “Brightest Show in Town” throughout the Jazz Age, with its most active years between 1923 and 1931. The venue reached its peak in 1931 when it hosted its most famous foreign act, the Long Tack Sam Company, world-record-breaking dancing from Frank Speerin, the first Miss Wagga pageant and the venue’s own 10-year anniversary. After that, the Wagga Brass Band started to dissolve as members left the Riverina due to increased unemployment and the beckoning of another world war.

In 1932, after the most recent flood, considerable support was behind the rejuvenation and expansion of the Bathing Beach Reserve, which extended to the Sturt Street entrance to Wagga Beach. This could have eventually absorbed Dixieland’s space as interest faded in Jazz and grew in community health/recreation. Eventually, in 1936, Wagga Municipal Council and community members ruled that the remaining Brass Band would combine with the Wagga City Band to form the Wagga Citizens’ Band. There is no evidence of the Citizens’ Band making an effort to maintain the jazz hall; perhaps it was not an option without Council and community support.

This history was written by Kate Allman (2017).