This website uses cookies to enhance your ability to browse and load content. More Info.
Start your search by entering a word in the Search Box above or wander through the collection utilising the browse menu options.
Filters

Two volumes entitled, "Two Expeditions into the interior of Southern Australia during the years 1828, 1829, 1830 and 1831, with Observations on the soil, climate and general resources of the Colony of New South Wales" (1833), published Smith, Elder and Co. London. A sign re. the donation by Mr John and Mary Paul of "Bontharambo", Dockers Plains Pastoral Company, Wangaratta. 3 postcards depicting The Grange, Adelaide. 2 copies of "About Charles Sturt: catalogue of material relating to Charles Sturt held in the libraries of Charles Sturt University. 1 brochure on Charles Sturt. A small wooden plaque with Charles Sturt University coat of arms. Large white banner depicting Charles Sturt. 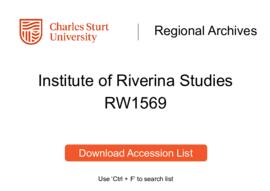 A Record of Olden Days, by Thomas Wilkinson; A Brief History of Yallowin, Tumut River; Bishop Francis Augustin Henschke (1892-1968), by Bishop F.P. Carroll; The Inside Sailors, by H.V. Evans.

The Way an Eagle Flew, by Archdeacon K.A. Osborne; The Burning Bush, by Keith Swan; In a Bend of the Murrumbidgee, by Sylvia Walsh; A Brief History of Wagga Wagga Methodist Circuit, by R.E. Wade.

Foundations [Journal of the Wagga Wagga and District Historical Society, No. 6]

The Anglican Diocese of Riverina, by Dr Laurel Clyde; History of the Wagga Wagga Agricultural Research Institute, by Dr Albert T. Pugsley; The Great Southern Road: from Tumblong to Lower Tarcutta, by Ross Petty and Dr David Denholm; The Coming of the Tumbarumba Railway, by Michael Lynch.

The Western Riverina: a history of its development by James Jervis [photocopied pages from the Journal of The Royal Australian Historical Society (vol. 38 parts 1-5)]

Shearing in the Riverina 1865

The Hume: Australia's highway of history [A Heritage Field Guide]

The O'Farrell Cup: the quest for the holy grail of Riverina cricket

They Came in the Brilliant: a history of the McLaurin, McMeekin, and Paton Families

In a Strange Land: a history of the Anglican Diocese of Riverina

Where Honour Guides the Prow: a story of early settlers of Sydney Cove, Norfolk Island and the Murrumbidgee [Charles Tompson]

Do You Remember the Fifties?: glimpses of a decade from the Riverina and Upper Murray

Heritage Farming in Australia: the Sloane family - changes and challenges 1860-1945

Photographs from the Collection of Thomas Alexander Macpherson

Exploration and Settlement in Australia

Up and Doing: A brief history of the Murray Valley Development League, now the Murray Darling Association, from 1944 to 1994 [1st and 2nd edition]

Midwives of the Black Soil Plains

The Woolshed: A Riverina Anthology

The Homestead: A Riverina Anthology

No Births on Monday

Still No Light!: an examination of The Australian Universities Commission's report on tertiary facilities in the Riverina

Co-operate - or Fail: an examination of the new degree-granting educational facilities in Victoria, as proposed in June, 1964

Never Mind the Country!: an examination of the first report of the NSW Committee on Higher Education

Pamphlet: The Riverine University League invites You to help in the fight for a Rural University in the Riverina area of Northern Victoria and Southern NSW. Join the League.

The Universities We Need

A Memorandum on the Australian Rural University

Memorandum and Articles of Association of the Riverine University League

The Case for an Australian Rural University, prepared by The Riverine Councils’ University League

An Abridged Edition of The Case for an Australian Rural University, prepared by The Riverine Councils’ University League

A Concise Statement of the Case for a Riverine Rural University

The Academically Under-Privileged: a reply to the Minister for Education's statement of reasons for putting a third university in Sydney

Riverina Source Materials No.8: An Introductory Geography of the Riverina, part 3 - the Riverina's soils and vegetation

Riverina Source Materials No.3: An Introductory Geography of the Riverina, part 1