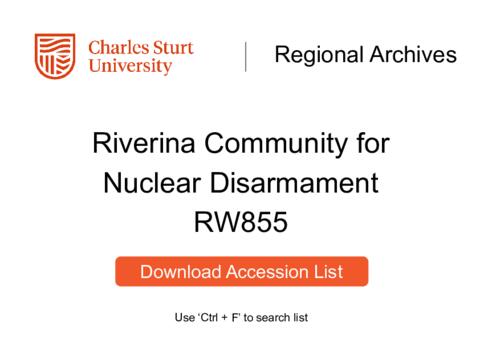 To understand why the Riverina Community for Nuclear Disarmament was established and active in 1982-84, we must apply a certain degree of historicism to the period. Until the Regan Administration came to office in the United States in 1980, the cold war had entered into a period of detente. The aggressive foreign policy of the Regan administration only had the consequence of renewing cold war tensions. By the mid-1980s, the nuclear arms race had reached staggering and dangerous proportions, as weapons capable of world wide destruction were manufactured at an incredible rate. Australia's contribution to the cold war included military installations, such as Pine Gap, and permission for US warships to enter our ports armed with nuclear weapons. Whilst the Australian Government saw this as a means to insure protection in this region, and an opportunity to cut spending on its own defence needs, it put the nation on a Soviet list of possible nuclear targets. Whether the Australian people liked it or not, they were part of the nuclear cold war.

The early 1980's nuclear disarmament movement was a major political issue, with grass roots community activism driving much of the protest over Australia's role in the cold war. Across local municipalities and regions throughout Australia, the idea of 'nuclear-free zones' was actively encouraged and advocated. While the 'nuclear-free zone' plan was embraced readily across the inner suburbs of Sydney, lobbying in the Riverina wasn't that successful. In 1982, the Riverina Community for Nuclear Disarmament asked State MP, Joe Shipp, to support the proposal of a 'nuclear-free zone' for the Riverina. Uncertain of the implications of such a move, he replied "I'll sit on the fence on that one for a while" (Riverina Leader, 5 May 1982, p. 11).

From the documents in the collection, held at the Regional Archives, it appears that the Riverina Community for Nuclear Disarmament group was particularly strong with educational campaigns. Activities organised included film nights designed to create an awareness of the drastic effects of a nuclear war. In 1983, the Riverina Community for Nuclear Disarmament fell into conflict with the Wagga Wagga sub-branch of the RSL for displaying anti-nuclear information on the notice board at the community library. The then sub-branch president argued that the poster and article on display were "lampooning two of Australia's dearest allies, England and the United States"(The Daily Advertiser, 23 August 1983, p. 9).

What is unique about the Regional Archives' collection is that it represents not only the establishment and work of the Riverina Community for Nuclear Disarmament, but the divisions within a community and nation caught up in the cold war.