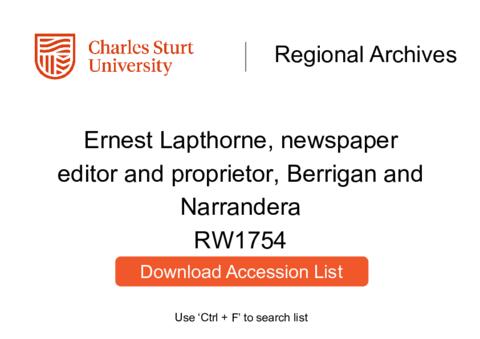 Ernest Lapthorne was born in Huntly, Victoria in 1871 and was the second youngest of a large family of thirteen children. Lapthorne left Victoria in c.1895 and took up a newspaper position in Berrigan, New South Wales, where his brothers Frederic and Charles were carpenters.

In 1896-97, Lapthorne made an interesting trip to the United States and Great Britain and subsequently documented his travel experiences in a series of newspaper articles entitled “From Berrigan to America” and “A Gumsucker Abroad”. The travel journal contains further documentation about his day to day activities abroad and reveals Lapthorne’s assiduous note-taking and budgeting. His scrapbook includes several photographs of Honolulu in Hawaii, as well as photographs of his home town, Berrigan.

After he returned to Australia, Lapthorne moved to Narrandera and became proprietor and editor of the “Narrandera Argus”. He was also active in the Narrandera Public Hospital, becoming treasurer and later president. He held the position of president until he retired in about 1916 due to ill health. Lapthorne died in Narrandera in February 1916 at the age of 44.