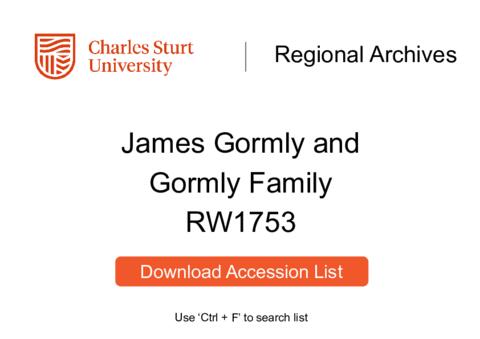 James Gormly was born on 24 July 1836 in Elphin, County Roscommon, Ireland and arrived with his family in Sydney as a bounty immigrant in February 1840. Four years later the family moved to Nangus, along the Murrumbidgee, and later settled at Gundagai in 1849. In the 1852 Gundagai flood, most of the Gormly family perished, except for James and his brother Thomas. The following year the Gormly brothers enjoyed some success, selling stock at the Victorian markets and finding gold on the Victorian goldfields.

James Gormly settled at Wagga Wagga in 1854, met and married Margaret Jane Cox at Holbrook in 1858 and successfully operated a government mail run until 1872. Margaret was born the daughter of Jospeh and ? Cox of "Livingstone Gully" on 26 November 1838. The Gormlys' pastoral interests continued when James bought land at The Rock in 1873, leased "Coronga Peak" in the Bourke district in 1875, then selling and taking up "Wilga Downs", at West Bogan. After selling "Wilga Downs" for a nice profit, he returned to Wagga Wagga in 1882, bought urban real estate and led an active political life.

After serving as a Wagga Wagga Town Alderman (1883-1885) and Mayor (1884-1885), James entered State politics as the Member for Murrumbidgee in the Legislative Assembly (October 1885 - June 1894). He was subsequently re-elected in the seat of Wagga Wagga in July 1894 until he resigned in June 1904. He then served in the Legislative Council from August 1904 until his death in May 1922. A member of the Public Works Committee (1894-1895) and strong avocate of the protectionist cause, James' career included representation in the Wagga Wagga Free Selectors' Association, the Mechanics' School of Arts, the Murrubidgee Pastoral and Agricultural Association, the Murrumbidgee Turf Club, the Wagga Wagga and District Horse-breeders Associaiton and the Library Association of Australia. He had a great love of horses and was one of the marathon jockeys who participated in the infamous "Ten Mile Race" held at Wagga Wagga on 20 November 1868. Before his death on 19 May 1922, James wrote many articles on the district's history, which were then gathered together in the publication "Exploration and Settlement on the Murray and Murrumbidgee" (1909). He was also the author of "The Discovery of Yass Plains" (1921), "The Flea-bitten Grey" (1921) and "Exploration and Settlement in Australia" (1921).

James and Mary's son, Richard Jospeh Ernest Gormly (1868-?) was also very interested in the history of the Wagga Wagga district and gathered up a large collection of notes and resources in preparation of writing a published history. His card index is held at the NSW State Library.

Concert programmes, scrapbook, invitations to James Gormly relating to the opening of the Centennial International Exhibition at Melbourne (1888) and the State Banquet Federation Celebration (1901).